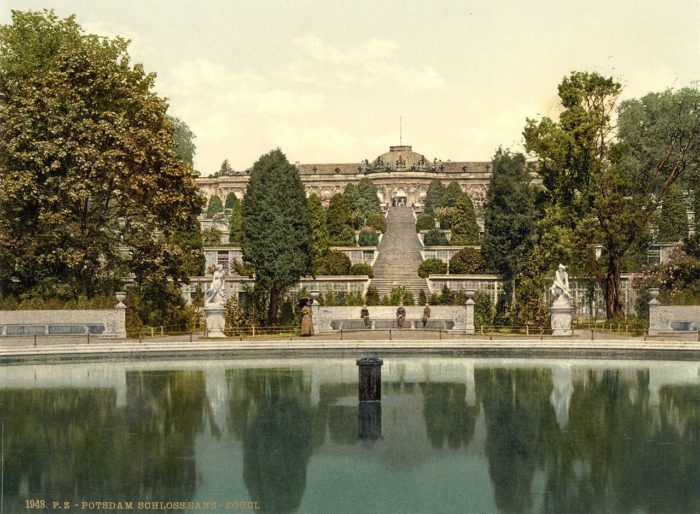 Sanssouci Palace and the vineyard terraces around 1900, photographer Unknown – This image is available from the United States Library of Congress’s Prints and Photographs division under the digital ID ppmsca.00357.

In this article we would like to go into the history of Sanssouci Palace as well as the history of its origins and the background to the construction of the palace.

After Frederick the Great had the mountain terraced in 1744, wine was grown there. On top of the vineyard, he had the castle built in the Baroque style. Friedrich and Knobelsdorf were in a violent argument before the building. Because the master builder wanted to build a cellar under the castle, but Friedrich did not. For this purpose, the castle should be built at ground level. Knobelsdorf bowed to Friedrich and so the castle was built according to his wishes. 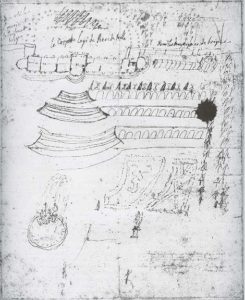 Hand-drawn sketch by Frederick II for Sanssouci Palace, 1744 (lost since 1945)

Sanssouci Palace was then built from 1745-1747 based on ideas by King Friedrich II and plans by Georg Wenzeslaus von Knobelsdorff and forms the center and highlight of the entire park.

In 1841, King Friedrich Wilhelm IV. expanded the Sanssouci Palace to include a western ladies’ wing and an eastern side wing for the kitchen and wine cellar.

The castle is located northwest of the then city of Potsdam and is part of the UNESCO World Heritage.

External links on the website can be affiliate links / advertising links or partner links. External links are marked accordingly.