Sanssouci Palace is located in Sanssouci Park in Potsdam. The approximately 290 hectare Sanssouci Park with its many castles of different styles is one of the most beautiful park landscapes in Germany. It is not surprising that this particular creation of architecture and gardening attracts thousands of visitors every year. Here you will find information about the park and its sights.

Sanssouci Park in Potsdam | Garden art over many centuries

The park itself was created by Frederick the Great in 1744 and expanded and redesigned several times. Countless garden artists were involved. These include Georg Wenzeslaus von Knobelsdorf, Heinrich Christian Eckstein and Peter Joseph Lenné. But these are just a few.

The core of the park are

In addition to Sanssouci Palace, there are many other attractions and sights in the park. These include the New Palace, the Orangery, the Chinese Tea House, Charlottenhof Palace, the Church of Peace and of course the park itself. 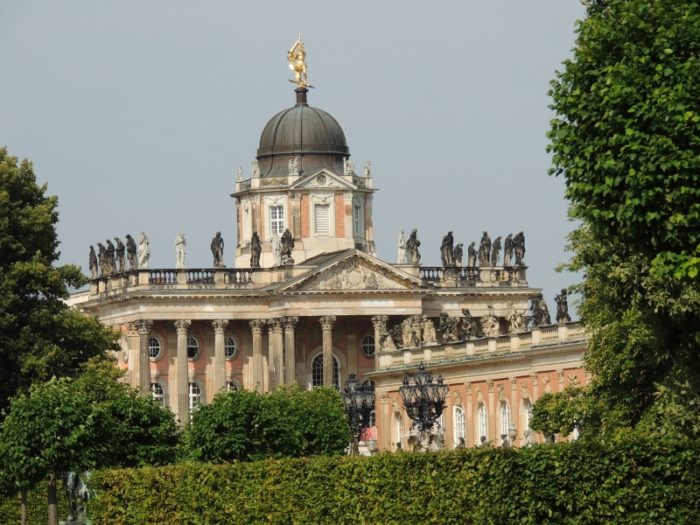 The New Palace, the Fanfaronade, was built to mark the end of the Prussian Seven Years’ War between 1763 and 1769. Builder for Frederick the Great included Büring, Manger and Gontard. The beautiful Rococo building stands in the west and forms the end of the park. It was Friedrich’s last creation.

Further information on the New Palace is available here. 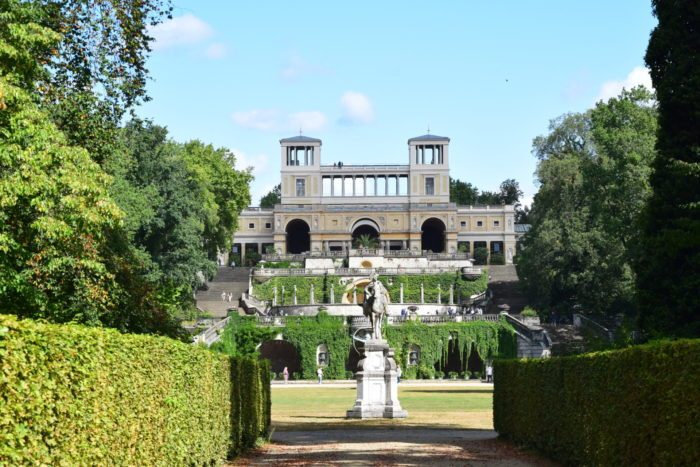 The orangery was built by Persius by order of Friedrich Wilhelm IV. From 1851 to 1860. The Italian Renaissance is reflected in the 300 m long building.

Further information on the Orangery Castle can be found here.

Frederick the Great had the small Chinese pavilion built near his summer palace Sanssouci. Life-size, gilded sandstone figures of Chinese musicians playing and dining are grouped around the Chinese tea house.

Charlottenhof Palace, modeled on Italian country villas, is a classicist summer palace designed by Crown Prince Friedrich Wilhelm IV and his wife Elisabeth. It is closely related to landscaping. It was originally built by Johann Gottfried Büring from 1756 to 1758. Later, from 1826 to 1826, it was transformed into a castle by Karl Friedrich Schinkel and Ludwig Persius.

Further information is available on our partner site Potsdam Sanssouci.

Discover the beautiful palace gardens of Sanssouci Palace in Potsdam with our partner GetYourGuide.

Other top sights in Potsdam and related tours and tickets are also available from our partner GetYourGuide.

If you visit Potsdam, you should definitely make a detour to the capital Berlin. GetYourGuide offers the perfect itinerary for 2 days – Berlin in 48 hours